3.5 stars
6.8
Rating
4 verified customer reviews
Online: In stock: Order before 19:00 for delivery the day after tomorrow

Order before 19:00
for delivery the day after tomorrow

Everything about the Cat B26 Dual SIM Black

Average scores of the Cat B26:

Description of the Cat B26 Dual SIM Black

Aren't looking for a smartphone that can survive in any situation, but for a simple no-nonsense phone? This Cat B26 is a phone that you can use for basic tasks, and you can use it for days on end. This is a robust phone, which is very useful!

This phone has an IP68 certification, so it's resistant to sand, dust, and water. It also has a MIL certification, which means that the device can survive falling from a distance of up to 1.8 meters. Even large differences in temperature are no problem for this small powerhouse.

You should get this black device if you're looking for a simple device that works in every possible situation. Waterproofness is guaranteed up to 1.2 meters for 30 minutes. Dust or dirt can't enter the phone either and it has a fall resistance with a maximum of 1.8 meters on concrete.

Standby time of over two weeks

You only have to charge this B26 a few times a month, which is great. The device can remain in standby mode for up to 18 days if it's not used. If you make lots of calls, you can easily get through the day. You can make calls for 13 hours on end on just a single battery charge! It's possible to replace the battery yourself, so it's always useful to bring an extra battery!

The internal storage of this device is not very large, but it can be expanded with a memory card of up to 32GB. This lets you store some music on the device. You can then listen to your stored music or to the FM radio via the 3.5mm jack and your own headset.

The manufacturer has chosen to equip this black and robust device with two SIM card slots. This way, you can be reached on two phone numbers with just one phone in your pocket. This is very practical if you want to keep your private and business life separate.

Another clever feature of this device is the presence of physical buttons, so it's easy to operate the phone when you have wet hands. It also has a flashlight, which is great while you're working or during the evening. All in all, the Cat B26 Black has some good features.

User manual for the Cat B26 Dual SIM Black

The user manual is not included but can be downloaded or viewed here: Dutch user manual. You can also download an English version: English user manual.

With normal use, we guarantee that your phone will work properly throughout the full warranty period. If something goes wrong, Gomibo.dk and Cat will make sure to help you out!

How do repairs at Cat work?

Tips & Tricks for the Cat B26 Dual SIM Black

Buy the Cat B26 Dual SIM Black? The options:

Accessories for the Cat B26 Dual SIM Black

Show all accessories for the Cat B26 Dual SIM Black

Accessories that go with the Cat B26 Dual SIM Black Show all accessories for the Cat B26 Dual SIM Black 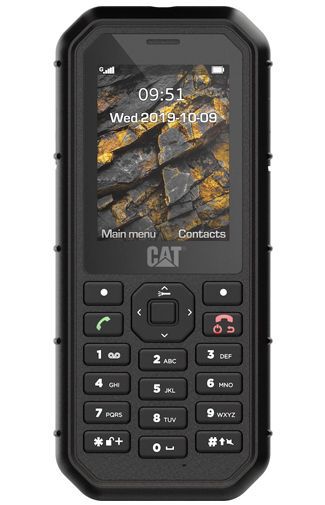