Everything about the Motorola Moto G Pro Blue

Motorola presented the latest device in their Moto G line on 26 May 2020: This is the Motorola Moto G Pro! This smartphone offers you just that little bit extra, because it is equipped with a handy pen, or stylus. Take notes, edit photos, draw pictures, whatever you like!

Other than that, you just get a rock-solid smartphone that runs on the Snapdragon 665 platform. The large battery means you can stay away from the wall socket for a whole day. The Motorola Moto G Pro has 128GB of storage space and is available in blue.

Motorola has provided a handy extra tool: A stylus pen, which you can keep inside the device. The Moto Note app allows you to quickly make a note, even when your device is locked. Even editing photos and drawing are now a lot easier!

This Moto G Pro has the potential to take a lot of great pictures, as it features a nice set of cameras, led by the 64-megapixel main sensor. You also get a macro sensor and a dedicated third camera.

That third camera is special because it gives you two useful functions in one! Not only is it an ultra-wide-angle lens, it is also an action cam! So you can shoot horizontal videos with your phone vertical and enjoy better image stabilisation.

Don't worry about struggling with powerbanks on the go, because the large 4000mAh battery of this Moto smartphone ensures that you can go a whole day on one charge. It also charges quickly with the 18W TurboPower charger that comes with the device.

The Snapdragon 665 chip that's inside this Motorola may not be a powerful gaming monster, but it's capable of handling all your basic tasks. It is more than fast enough to surf the net, watch videos, and send photos to your friends on Facebook or Instagram.

The built-in NFC chip allows you to use the Motorola Moto G Pro, available in blue, for contactless payments. The Bluetooth 5.0 connection is energy efficient and has a low stall speed, so you can also use a wireless headset without any problems.

Many Android users complain about an excess of extra apps and cluttered menus. Not any more, because Motorola offers you the Android One program! That's great, because you can enjoy Android 10 as Google intended: Clean and clear!

Show all accessories for the Motorola Moto G Pro Blue

Accessories that go with the Motorola Moto G Pro Show all accessories for the Motorola Moto G Pro 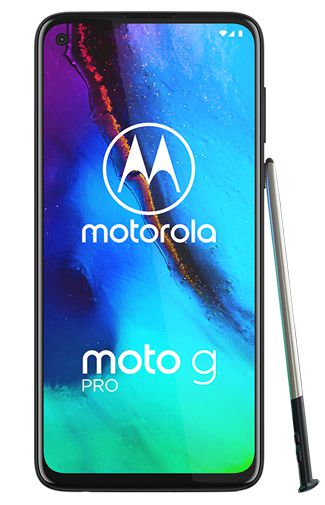